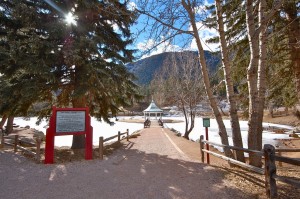 The Ute Pass area is made up of the small towns of Green Mountain Falls, CO, Cascade, CO and the area of Chipita Park, CO.

Green Mountain Falls
Long before the town existed, a trail ran by the site of present-day Green Mountain Falls. This trail, known as the Ute Pass Trail, was used first by the Ute tribes, then Spanish explorers and finally by white settlers moving west. This scenic mountain community was one of three towns set up as vacation spots first for dust-weary Kansans, then upper-class Easterners. Today, the trail has been paved over and is still used as Route 24. Set in a picturesque, narrow mountain valley, the town is surrounded on three sides by Pike National Forest. The number of people in Town increases significantly in the summer as people from other states arrives to use their family cabins. These people are commonly called “summer residents” and they bring a sense of tradition and a love for the community.

Architecturally, the Town has a variety of rustic summer log cabins and Victorian houses mixed with newer homes. The Town’s character is reflected in the preservation of historic structures including the original land office building, hotels, and the Church in the Wildwood. The Town’s focal point is an 1890 Victorian gazebo on an island in a small lake.

The Town location supports a unique life style by providing a beautiful natural setting for a mountain home close to the employment opportunities, services, and culture of a nearby large city.

Cascade
The scenic mountain community of Cascade is nestled among the Pikes Peak foothills just minutes from Colorado Springs. Named for nearby waterfalls, Cascade beckons to visitors as the front door to Pikes Peak, the country’s most visited mountain. Every year, more than a half-million people reach the peak’s 14,110-foot summit. Cascade also houses historic businesses like the Eastholme Inn, an 1885 Victorian, where the sheet was once turned back for Dwight and Mamie Eisenhower.

Hiking trails to local waterfalls include the Heizer Trail in Cascade Community Park and the Catamount Trail in Green Mountain Falls.

Chipita Park
Shadowed by the 14,110-foot Pikes Peak, Chipita Park is just minutes from famous mountain restaurants and such outdoor activities as fishing and hiking. Chipita Park is the youngest in the collection of towns in the Ute Pass, which was first used as a path across the Rockies by the Ute Indians. Spanish explorers and missionaries were the next group to utilize the pass and, finally, the trail was paved over and became Highway 24. The towns along the Ute Pass sprang up in the 1800s, first as vacation spots for Kansans in the hot summer months, and later for easterners. Now, Victorian-style houses line area streets, creating a charming and tranquil atmosphere.